Allure and intrigue; stepping into the mind of Lungiswa Gqunta

Artists are like merchants of mystery. In their works we find fascination and allure and in them lies the intriguing secret behind their magic. Perhaps what makes art so magical is the infinite openness to interpretation that we, the viewer, are invited to colour according to our own experiences, hopes, hurts, happiness and fears. Perhaps the beauty of art lies in just that, recognising the aspect of the artwork that resonates or represents a piece of ourselves.

We chatted to Lungiswa Gqunta recently about her journey into art, how it all began and where she finds herself now. She also shared with us the challenges young black artists face in South Africa.

Here we take an intimate journey into the mind of this merchant of mystery to learn about the story behind the magic of two recent solo exhibitions.

Qokobe speaks on segregation and tools of segregation, one of them being alcohol, Lungiswa explains, 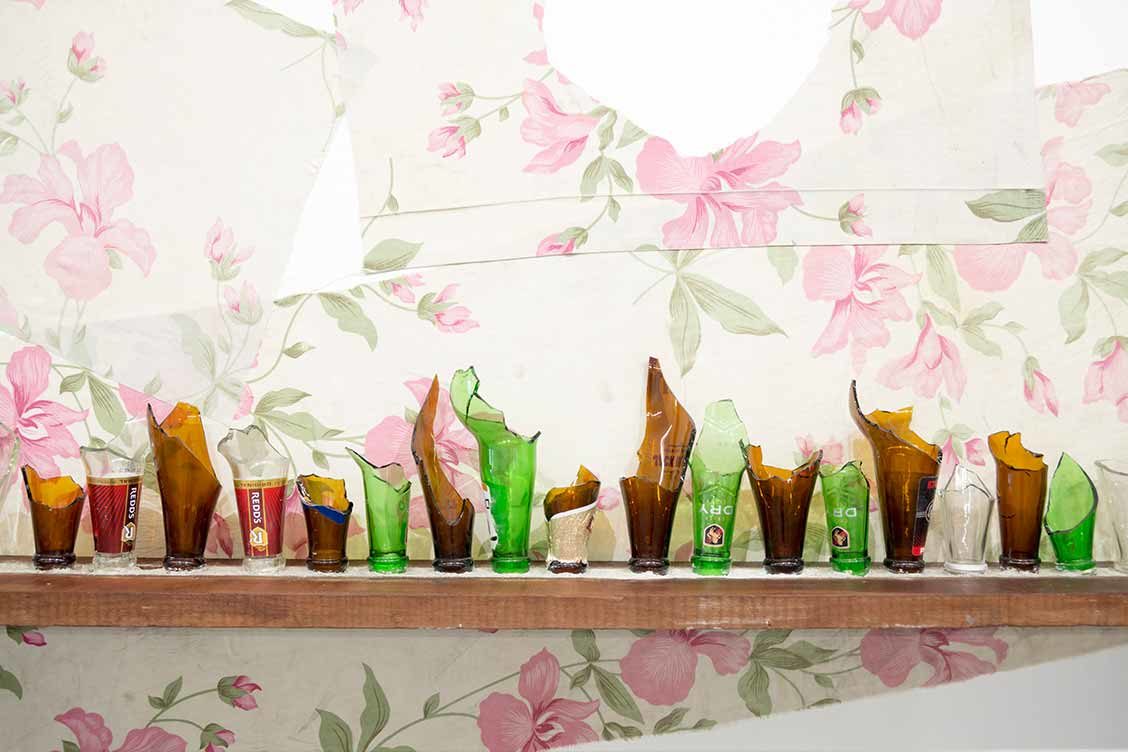 “Alcohol was used as a tool of segregation to disarm the people essentially. And it’s still being used in that same way today if you look how they introduce certain alcohols in certain spaces. It’s speaking on the effects of alcohol in a community and how it acts as a divider of a community, of families.”

This body of work highlights the corrosion caused by alcohol but also serves as a means to revolt against it. Regarding ‘Divider’ Lungiswa shares that the hanging installation has been read in many different ways and gives us insight into the concept behind it:

‘What I was doing was making petrol bombs essentially with an extended wick. I understood what I was doing, articulating the divide and also saying “to hell” with the divide by making it out of something that is potentially explosive. But obviously people have come with beautiful other readings into the work.’ 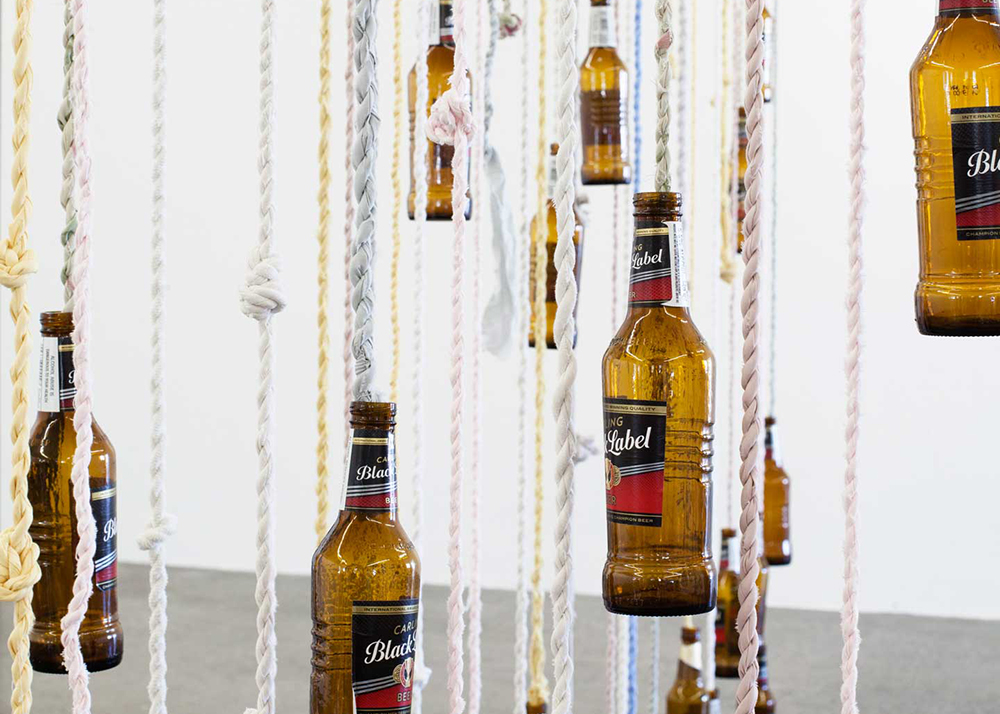 One such interpretation of ‘Divider’ highlighted the effects of alcohol that extends beyond the home to generations and communities as a result of the Dop System, which she regards as a very violent tool that is still existing today, and the subsequent effect of Foetal Alcohol Syndrome.

‘Someone said the roots look like umbilical cords and that how they linked it to Foetal Alcohol Syndrome.’

‘It’s always nice when people can add to your narrative, having understood what it meant and saying there’s also this and there’s also that. And they connect with the work differently.’

The work in itself speaks to labour and what labour is, what it can be. One of the wall installations, Feet Under Fire, depicts her trying to light the matches on the ground through gravel. This conjures thoughts of the home and remembering labour in the home, upkeep in the home, she explains. 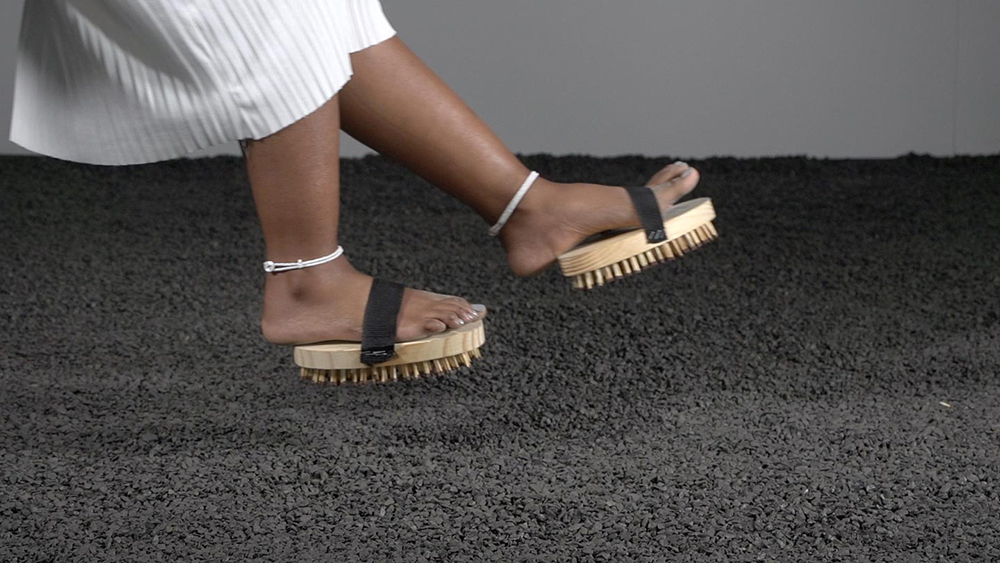 ‘If this is what you have and you’re cramped up, once you have been imprisoned in these matchbox houses they try and make the best of what they have. They put in so much effort in making their homes beautiful. They take pride in it. For me that’s great and that’s where these elements of these things come in.’

‘Back then we had a red stoep. We still have it actually but we’re not as obsessive about it as we used to be. You had to polish it until it shines, on your knees. When my friends come in here and I talk about the red stoep they all have stories of how we had to labour, and we all had to be on our knees to make sure that our family’s house, always looks amazing. I was thinking and remembering that act of buffing the stoep so that it shines and in doing so, in my work, I work of resistance. I don’t think only of us, black people in resistance, but I call on my ancestors because I am speaking of land and so I cannot take them out of the narrative. I’m always calling and asking them to be in the work and to help me figure out ways to move forward, to create a change and to articulate something that somebody may be having trouble understanding.

Whenever I speak of segregation or of land or displacement and how violent it is I’m always also speaking with them in mind. So, when I was thinking of that act of buffing, that movement reminded me of waking up somebody when they are in a deep sleep. This can then be the equivalent, I’m on my knees, on the ground, I’m dealing with the actual ground I walk on, this act in itself I see as an act of waking them up also. Waking the ancestors up saying ‘ok, now it’s time, so, you now must also come with me and you must be within me to fight and to resist in any which way we need to.’ More of a help me light this fire sort of thing, help me set things alight to really start this whole thing. It’s time to wake up and it’s time to get things going. That’s why I substituted the bristles with the match sticks’. 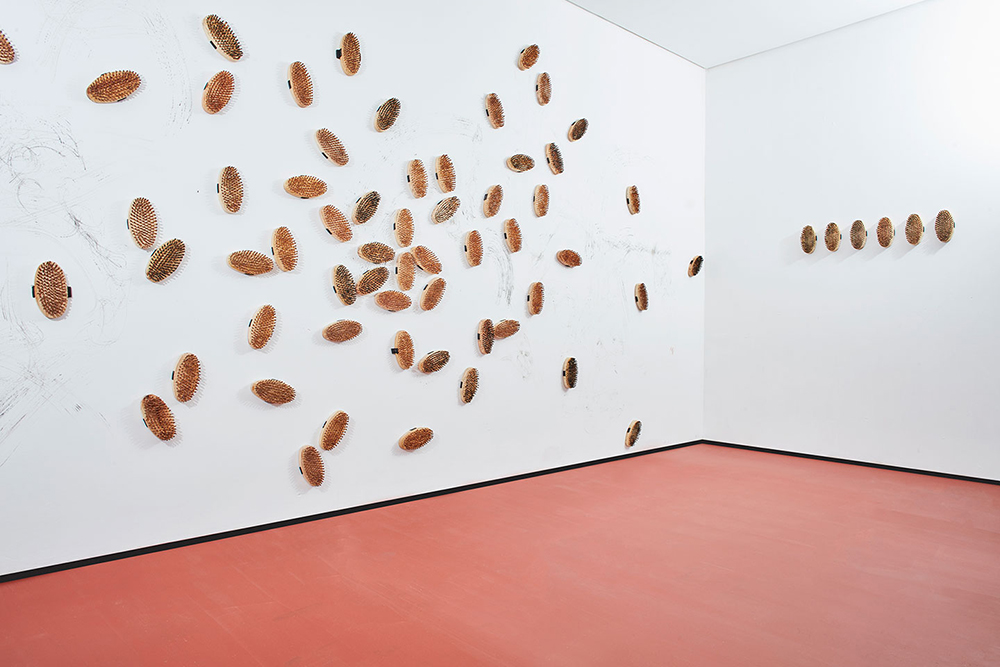 The show speaks of spaces and continuing the question of townships and segregation and how, in this day in age, are we living so segregated, and how is a township a thing that still exists, Lungiswa explains. Furthermore she questions,

‘How is something like the suburb something in existence? Because they exist, they rely on the other. They are each other’s opposite. Why are we living amongst this divide?

Lungiswa speaks on narratives of her home and living in the township as well as suburban Cape Town.

‘One of the pieces is “sleeping pools” and it is a bed that I put Perspex on and it now has liquid – petrol, ink and water, this glowing pool. Something that’s very toxic. You find those environments of incredible lush green lawns and swimming pools and you see these when you’re walking past through a gate. There is constantly a barrier from you having or being able to access. You are always seeing from afar, always gazing through these bars and all kinds of methods of segregating, barring and bordering.’ 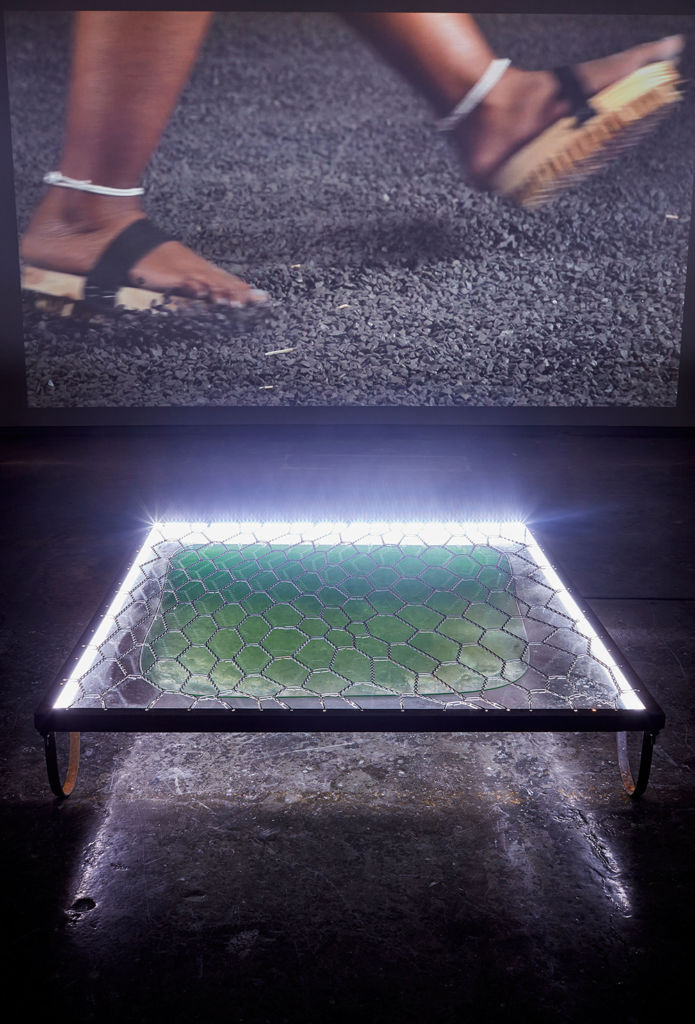 ‘The show is touching just on how violent spaces in themselves can be and how we navigate through those violence’s and also how to use, or how we can use those same things, those structures, how do we revolt against it? Its saying “it’s enough” let’s deal with the foundation. We’re working on a cracked foundation and the rainbow nation does not exist. People must stop kidding themselves, it’s an illusion and there are many examples as to why it is an illusion. I am one of many people who showcases that. But you don’t need to be in a gallery to see that, you don’t need to see my work, you just need to go around the country, you need to step outside your space to understand what we mean by saying that.’

In doing this work Lungiswa explains that it is helping her understand what kind of political work she needs to do.

‘Making this work, I consider it my act that is very much political and that is in line with resistance and revolution and that’s what I’m doing. I am making political work. I am working towards something. It’s not even just about making work to sell it’s about making experiences of discomfort so that those who don’t know (can) know and have no excuse to say they don’t know and then for them to question ‘what can I do now?’ and not just be looking at a pretty thing and say oh how touching it speaks about that, and then you go home to your bougie house. No! If you are going to interact with this then you must at least feel something. I am trying to force an environment where people can feel the discomfort in any which way and for this thing to stay with them.’ 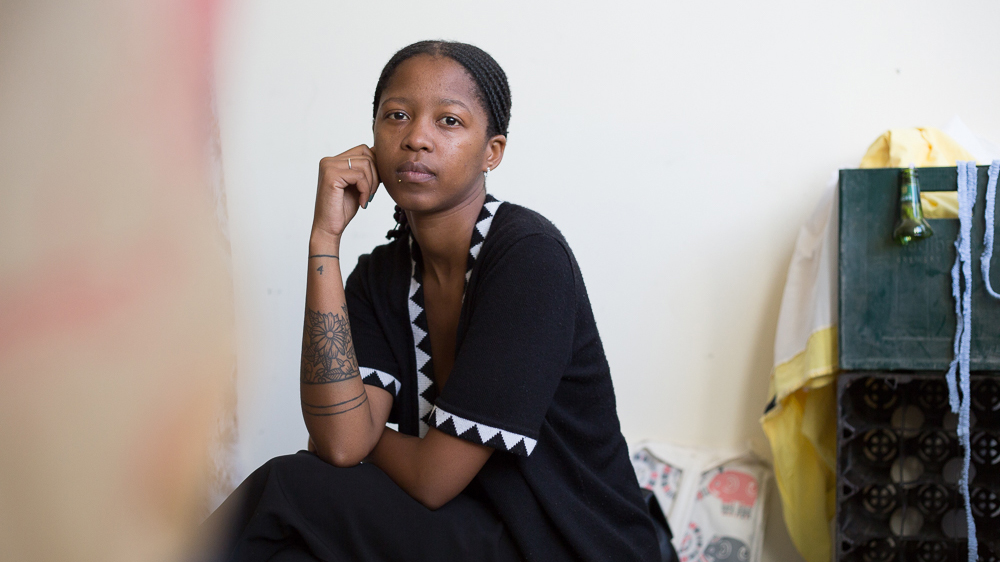 Lungiswa in her studio.

Qwitha will be on exhibition until the 30th of June at Whatiftheworld gallery in Woodstock, Cape Town. Visit this space to encounter the magic of this talented artist for youself.