Work @ an NPO: A page out of The Bookery’s tale

A day in the life with NPO The Bookery

Non-Profit Organisations (NPOs) play a pivotal role in society. For some there is the misconception that NPOs are simply ‘charities’ and at times they are viewed in a ‘soup-kitchen’ light but these businesses are often just as progressive, innovative, and successful as their ‘for-profit’ counterparts.

We chatted to two employees at a Cape Town based NPO, The Bookery, to find out more about the ins and outs of working at an NPO.

The story of The Bookery began in 2010. In South Africa over 85% of public schools do not have functional libraries and it was this startling fact that inspired the team at Equal Education, a Cape Town based NPO, to launch their School Libraries campaign, which they called The Bookery. Within just three years, The Bookery grew to such an extent that it became an independent NPO.

In brief, The Bookery provides a library and a trained young librarian to under resourced public schools in South Africa. The team gathers, sorts and catalogues thousands of books and places, on average, a collection of 4000 books into each school. It’s not a matter of simply planting the library but rather working closely with the school, the librarians, and a number of partners within the community to ensure that the library functions and thrives on all levels so that the pupils can have a safe place to improve their literacy, expand their understanding of the world and find joy in reading.

Jonny Wilkinson works at The Bookery as the Fundraising and Communications Officer. Jonny says that for this role one needs to be a good communicator and one needs to be very well-organised and furthermore, “You need to have a good awareness of what’s going on around you and a deep understanding of your organisation and what it does.” Jonny explains that a proactive, hands-on approach is necessary when it comes to working at smaller NPOs as there can be a large workload that a small team is carrying and one often needs to lend a hand in other areas. When asked about what he finds most rewarding he says, “Working for something I feel is making a difference to the country.” He has an eager heart for social development and education and being able to contribute to this is a big driving force for him. The opportunity to meet people from many different backgrounds, and more importantly to learn from them, is also a great reward, he explains. 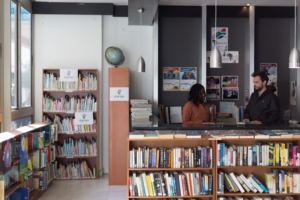 Nobesuthu Faku has been with The Bookery for the past three years and she holds the position as Front Office Administrator. Her role includes ensuring the smooth running of the office, coordinating volunteers, and running the implementation of the new libraries. Nobesuthu reiterates that good communication skills are key in this field of work and adds that it is important that one be computer literate. ‘We work with both local and international volunteers. Leadership skills are very important as you work with people from different backgrounds. You need to be able to manage them, to be able to put them to work, and to support them.’ There are many challenges but also many opportunities for growth in this field, explains Nobesuthu

The greatest reward for her is seeing the school children gain access to books. Nobesuthu experienced first-hand what it was like to grow up without access to a library and says that it was only after Grade 12 that she read her first novel. “We had textbooks growing up but ‘reading’ wasn’t the norm.” She describes the wonderment she experienced after reading her first book and the awe she felt for this incredible, new world of reading she was introduced to through that first novel. It is a world that every child should have access to and thanks to the work of the team at The Bookery, every child can have this access.